Do metaphors put us on the right track?

Do metaphors put us on the right track? Earnsy Liu, TechCommNZ member and GDID student, looks for evidence (not just opinions) to help you manage the daily conundrums we face in our profession. If you have a question for Earnsy to tackle, please email comms@techcomm.nz. This month, Earnsy investigates whether metaphors matter in technical communication.

What do the crossroads of life, the greenhouse effect, and jump-starting the economy have in common?

They’re all metaphors: expressions describing ‘a person or [an] object by referring to something that is considered to have similar characteristics to that person or object’ (‘Metaphor’, n.d.).

Do metaphors matter in technical communication? Do they influence thinking – how, and how effectively? Which should we use?

They’re common, ‘often so common in our daily lives that we do not think of them as metaphors’ (Asplund, 2011, p. 2). It is estimated one out of every 25 words is a metaphor (cited in Gorlick, 2011). We even have visual metaphors – think of the folder icon on your computer (Praetorius, cited in McClure, 2009, p. 41). In fact, they’re extremely important in graphical design (E. Harding, personal communication, January 24, 2017).

It is argued that metaphors facilitate understanding by making concepts less abstract, and that they improve user experience by increasing appeal, engagement, and motivation (Idler, 2012; McClure, 2009).

They can provide new insights and facilitate discussion: ‘Novel metaphors can lead us to think about old problems in new ways and to discover new solutions. Further, by simplifying the problem space, and allowing reuse of knowledge from everyday experience, metaphors can allow more people to participate meaningfully in policy discussion’ (Thibodeau & Boroditsky, 2013, p. 1).

However, metaphors ‘always [highlight] certain perspectives while hiding others’ (Asplund, 2011, p. 5). A New York Times columnist preferred to talk about towing the 2011 US economy rather than about jump-starting it. He argued the jump-start metaphor would ‘[lead] people to downplay the problems that arise when temporary stimulus fades away’, whereas towing would suggest the extended support it needed (Krugman, 2010). Psychologists Thibodeau and Boroditsky contend metaphor selection ‘may lead to an illusion of simplicity and bad policy decisions, even among experts’ (2013, p. 1).

Do they influence thinking?

Recent evidence on how they affect thinking comes from a series of experiments by various researchers, starting with Thibodeau and Boroditsky.

Crime is a {wild beast preying on/virus infecting} the city of Addison. The crime rate in the once peaceful city has steadily increased over the past three years. In fact, these days it seems that crime is {lurking in/plaguing} every neighborhood. In 2004, 46,177 crimes were reported compared to more than 55,000 reported in 2007. The rise in violent crime is particularly alarming. In 2004, there were 330 murders in the city, in 2007, there were over 500.

1) In your opinion what does Addison need to do to reduce crime?

2) Please underline the part of the report that was most influential in your decision.

Subsequent experiments varied the text and tasks, but tasks were generally about crime mitigation solutions, and about which part of the text affected their response.

Although a few of the experiments were carried out on undergraduates, including the very first one, most experiments crowdsourced participants online. This made it possible for people of varying ages to take part, often between 18 and 70 years, but averaging just over 30 years. This also enabled huge samples (frequently a few hundred), usually native speakers. The ages and sample sizes make me think the findings probably apply to the general population better than experiments involving ‘just’ a few dozen undergraduates.

Responses were categorised as ‘reform’ or ‘enforce’:

This echoes a previous finding that metaphors encourage some solutions over others (Robins & Mayer, cited in Reijnierse, Burgers, Krennmayr, & Steen, 2015, p. 246).

Experiments in German by Christmann & Göhring replicated the effect – and found an interesting difference: overall, irrespective of the text read, responses in the English language studies favoured enforcement, while responses in the German study favoured reform (figure 1). They attribute the difference to the infrequency of the word ‘beast’ in German (relative to ‘virus’), and its unconventional use to describe situations or issues (2016). 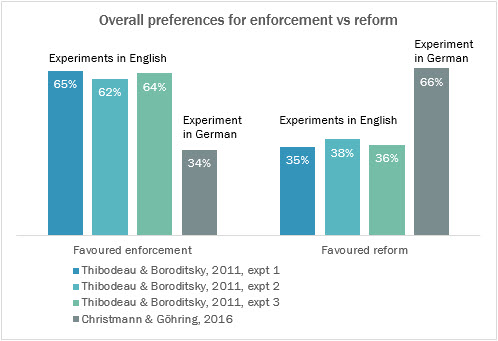 Steen, Reijnierse, & Burgers (2014) have challenged Thibodeau and Boroditsky’s findings for:

Crime is a beast/virus ravaging the city of Addison. Five years ago Addison was in good shape, with no obvious vulnerabilities. Unfortunately, in the past five years the city’s defense systems have weakened, and the city has succumbed to crime. Today, there are more than 55,000 criminal incidents a year - up by more than 10,000 per year. There is a worry that if the city does not regain its strength soon, even more serious problems may start to develop.

After Thibodeau and Boroditsky (2015) analysed their critics’ work and carried out fresh research, they maintained their findings were correct. They concluded that Steen et al.’s experiments:

How do metaphors work?

Metaphors work ‘covertly’ – as Thibodeau and Boroditsky put it – and efficiently when they are integrated upfront into text:

How effective are they?

Effectiveness seems to depend on perspective and prior knowledge.

This could partly explain why The Economist used 55 per cent more metaphors than The International Economist (Cardini, 2014); perhaps The Economist caters to its less expert audience by using metaphors to explain concepts.

The researcher, a linguist, put this down to different writing styles or a need for The Economist to make things interesting. That’s possible too: participants find text more vivid and sometimes less complex when a metaphor is used in more sentences (Reijnierse et al., 2015).

So which metaphors should we use?

Participants do not always prefer metaphors. Presented with a choice of ‘beast’, ‘virus’, ‘problem’, and ‘horrific problem’ to describe severe crime, most preferred ‘horrific problem’, as shown in figure 2. We should be careful before generalising from this though, since metaphors vary in different dimensions, including novelty, vividness, and conventionality (Steen, 2014; Thibodeau and Boroditsky, 2015). 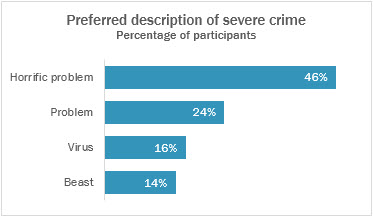 Figure 2: Nearly half the participants preferred a plain expression – horrific problem – to a metaphor (adapted from Thibodeau and Boroditsky, 2015).

How do we know when to use metaphors, and which ones? I don’t know, to be honest. I tried asking Thibodeau and Boroditsky but one of them was on leave and the other did not reply. Perhaps future research could test metaphors on users, to check for familiarity and unintended associations. For now, it’d pay to pick metaphors that highlight the appropriate perspective, and to consider using them when explaining something technical or dry to beginners.

Thanks a million to Emma Harding for her guidance and valuable comments.

Christmann, U., & Göhring, A. L. (2016). A German-language replication study analysing the role of figurative speech in reasoning. Scientific Data, 3. Retrieved from https://www.ncbi.nlm.nih.gov/pmc/articles/PMC5079120/

Gorlick, A. (2011). Is crime a virus or a beast? When describing crime, Stanford study shows the word you pick can frame the debate on how to fight it. Retrieved from Stanford University website: http://news.stanford.edu/news/2011/february/metaphors-crime-study-022311.html